Lenovo has launched the Lenovo A7000 in India. Like the earlier model this device is an online exclusive product and will be sold exclusively by Flipkart. Just like the last time, Lenovo is going for a flash sale model. The device is a successor to the already popular Lenovo A6000 handset. Now thanks to the A7000, smartphone buyers under the ten thousand mark have more options to choose from.

The device was first revealed at the Mobile Week Congress in March 2015 and just like the A6000 the device was available for purchase in about a months time. The phone is an upgrade over the old one and has grown in size as well. Looking at the increasing interest for smartphone with big screens the timing of the A7000 couldn’t have been better.

The phone has a 5.5 inch screen with a resolution of 1280×720 pixels, a bump over the older A6000 but exactly like the one on the Yu Yureka. The processor has been beefed up as well, it sport a 1.5GHz Octa Core processor (MediaTek 6572m) with 2GB of RAM. The combination makes the phone capable of handling some multitasking and gaming without breaking sweat. On the software front the device comes with Android Lollipop out of the box. This gives it an edge over the competition which still ship with Android Kitkat. There is 8GB of internal storage for user data and apps and a MicroSD card slot that accepts cards up to 32GB

The A7000 is also the first phone with Dolby Atmos, this enhances the music listening experience with the device. It sports an 8 megapixel autofocus camera with LED at the back and is capable of FullHD video recording. At the front it has a 5 megapixel fixed focus selfie camera. It is a 4G LTE enabled device and supports TD LTE Band 40, which is the only available 4G band in India. Looking at the need of better battery life for mobile device the phone has a removable 2900mAh battery.

The device takes on the likes of Yu Yureka and Xiaomi’s soon to me announced Mi4i. With the sub 10K segment of the market filling up with spec-loaded phones it’ll be interesting to see what the companies do next to attract consumers. 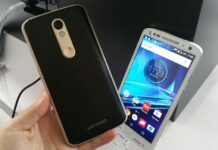